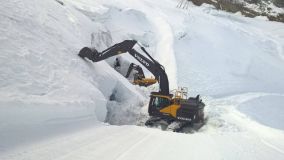 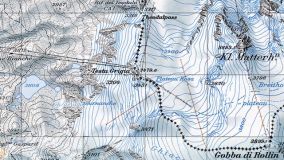 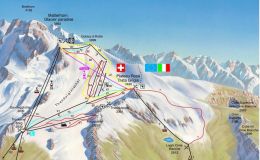 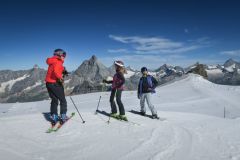 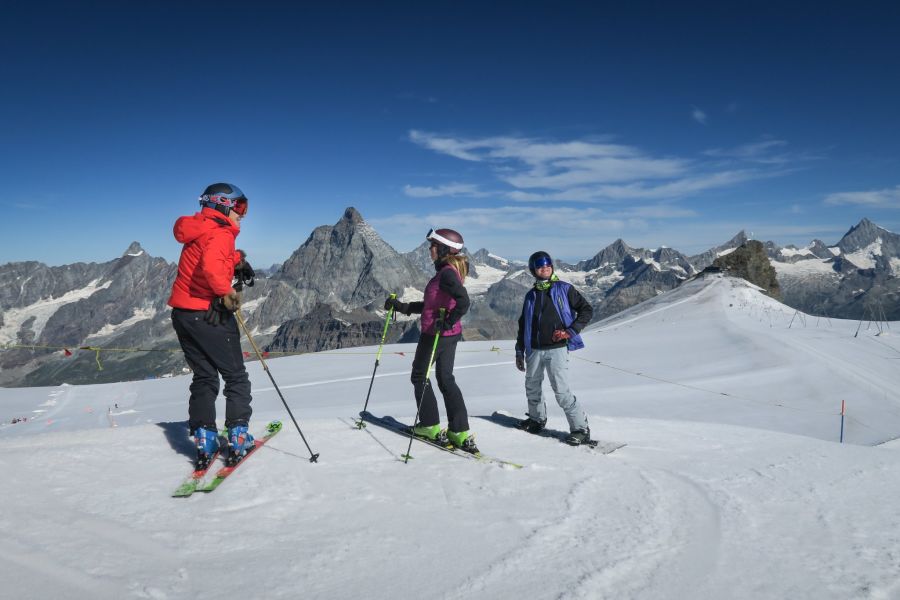 The number of ski areas open for summer skiing and boarding in Europe is set to get back into double figures for the first time since early-May, potentially, with Cervinia set to open on Saturday, 25th June.

'Potentially' because Tignes, which opened last weekend for a planned six-week summer ski season has been closed the past two days and its unclear if it can reopen. On Thursday it said there was "technical issue" but it has not given a reason why its closed today. However its snow report notes just 15cm (six inches) of snow cover on its glacier, with above freezing temperatures and webcam images show a lot of blue melting ice exposed on the Grande Motte.

Cervinia largely provides access to the year-round glacier ski area above Zermatt on the Swiss side of the border, although there is a small amount of terrain on the Italian side.

Cervinia has warned though that it is opening for summer skiing is subject to the same issues Tignes outlined when it opened – below average winter snow accumulation followed by a very warm spring that saw temperatures reach +10C above 3,000m in May and June.

The glacier is due to host four new cross-border World Cup downhill races next autumn on the final weekend of October and first weekend of November, two each for male and female racers, before the speed tour moves on to its traditional start events in Lake Louise and Beaver Creek.

Val d'Isere decided not to open for summer skiing at all this year for the same reason and the Molltal glacier in Austria is also closed at present.

The glaciers that are open include Fonna, Galdhopiggen and Stryn in Norway – which days unlike the Alps it had a snowier than average winter 21-22 and cooler than average spring so snow depths are up to 7.5 metres.
There's also Hintertux and Kitzsteinhorn in Austria, Les 2 Alpes and Tignes in France, Passo Stelvio in Italy and Zermatt in Switzerland.

It used to be possible to ski down to Laghi Cime Bianche and to Trockener Steg in summer, but not anymore. The piste map on the Cervinia website is very misleading, it shows the spring, summer and autumn ski areas, the lifts and pistes shown are not all open in summer. I have outlined the extent of the summer skiing area in yellow. 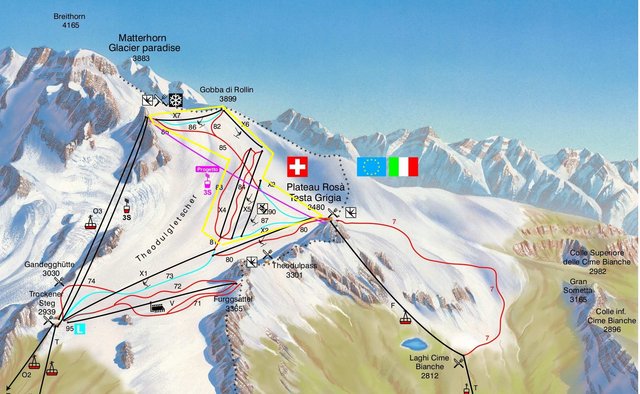 Looking at the state of the glacier at the moment (there looks to be about the same amount of snow on it as there normally is in August) it's difficult to see how they are going to manage to scrape together enough snow together to build a downhill course by the end of October.

Thanks. So realistically summer skiing on the Italian side is over? (in summer months) I've been pondering the end-October/early Nov races, it is hard to see it at this point but I think it was 2020(?) there were huge September/early October falls so I suppose that might be enough IF they arrive this year in early autumn? Not sure if there have any Snowfactory type snowmaking machines either? I know they had the IDE one 15 or so years ago but not sure if it's still functioning?

Thanks for the 'reality' summer ski map too. I've noticed others that claim 20km or more summer ski areas (Les 2 Alpes, Tignes) rarely seem to have more than half of it actually open.
www  The Snow Hunter
Edited 1 time. Last update at 24-Jun-2022

I don't think there has been any official summer skiing on the Italian side for quite some time The Swiss topographical maps show that there was a drag lift on the Valtournenche glacier between 1982 and 1987, but it is not shown on the 1988 edition, and as you can see even in the 1980s the glacier ended a long way from the cable car station at Laghi Cime Bianche. 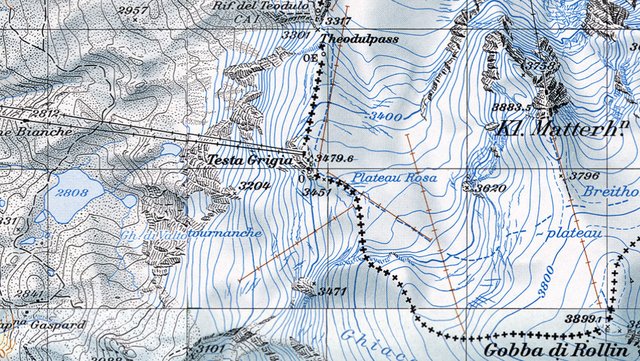 In some years there is snow cover down to Laghi Cime Bianche until around the beginning of July, but I don't think they mark, prepare or patrol the piste.

The "Gran Becca" https://www.zermatt.ch/en/Media/News/Events/Gran-Becca-The-new-course-in-the-World-Cup-calendar race course doesn't follow the same route as the existing pistes across the glacier so they will have to build a new piste during the summer. Any crevasses along the route will have to be filled in with snow that's currently lying on the glacier. On the Italian side they will also be able to use the snow from last season that they covered up near the bottom of the glacier. If it is cold enough in October the section from the end of the glacier on the Italian side to Laghi Cime Bianche will be covered with snow from the newly installed snow making system. Hopefully there will be enough natural snow to make the place look wintery.

There is an IDE snowmaker at Trockener Steg that is used to make snow to cover the track from the end of the Theodul glacier to the lifts at Trockener Steg at the beginning of October. It usually takes around 2 weeks to cover the 700m long track. If there is enough water they could also use it to make snow for the downhill course, but transporting it up to Plateau Rosa would be a challenge.

Zermatt claims to have 21 km of pistes in the summer ski area, but several of them are only used to get to and from the lifts. Most skiers only use the pistes adjacent to the 3 parallel drag lifts. Zermatt also claims to offer year-round skiing, even though visibility on the glacier is good at the moment and there is very little wind all the lifts are closed.

The glaciers in the Alps are having a hard time at the moment, you might be able to glean some information on how the summer skiing season might pan out from this article on the Austrian TV news site https://orf.at/stories/3272859/

I don't think many people realise the amount of effort required to make the glacier ski areas safe. 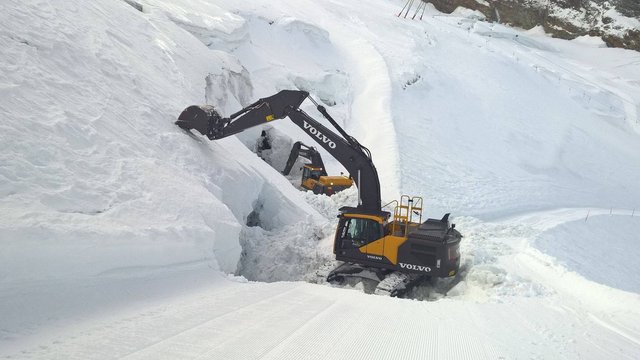 If they don't find all the crevasses it can have very serious consequences, fortunately in this case the driver escaped unhurt. 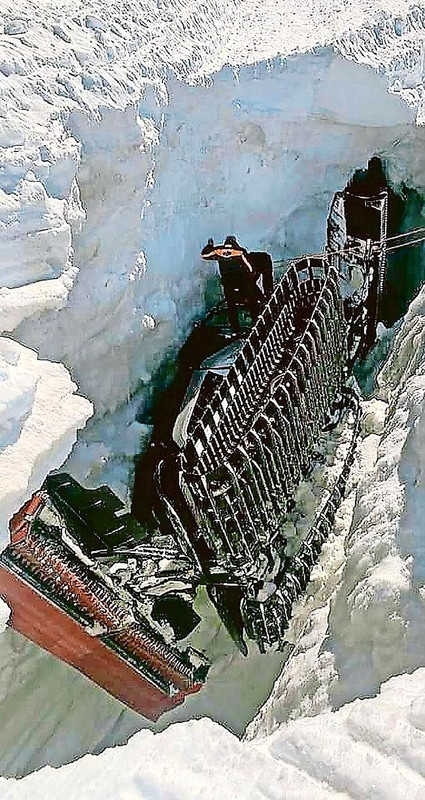 There is snow forecast to fall in France over the next week, in at least 5 Ski Resorts including Chamonix, Chamonix Sud, Espace Killy, La Flégère and Val d'Isère.